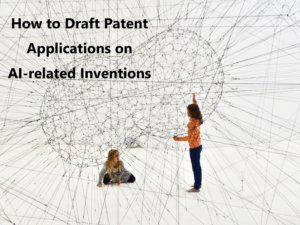 Artificial Intelligence (AI) have been used in a wide variety of areas, including image processing, targeting advertising, natural language processing, robotics, and medical diagnoses.  According to the Japan Patent Office’s (JPO’s) annual report, patent applications on AI-related inventions have rapidly increased in number in recent years.

To assist examiners and applicants in understanding how the JPO applies the written description requirement to particular situations, the Office has updated its Examination Handbook to include new Examples 46-51 regarding AI-related inventions.

A machine learning algorithm learns from a training dataset to build a mathematical model.  The training dataset includes multiple datasets, typically, example pairs of input and the corresponding output.  For example, multiple datasets may include ads data on advertisement activities for a particular product, review data on reviews from customers for the product, and sales amount data for the product.  The mathematical model leans to predict sales amount of a similar product in response to receiving ads and review data for the similar product.

Claims may recite a particular mathematical model learned from a training dataset including multiple datasets.  Based on the new Examples, the written description requirement is considered to be satisfied in a case where:

The JPO’s materials can be found in the following website.